Equality of Opportunity for Young Children

Children are born into very different settings: families with higher or lower incomes; two parents or one; neighborhoods with high poverty and unemployment; and many other differences. On average, and of course with lots of individual exceptions, these circumstances of early childhood matter. For example, Ariel Kalil and Rebecca Ryan write in their essay in the Spring 2020 issue of Future of Children (“Parenting Practices and Socioeconomic Gaps in Childhood Outcomes”):

For those unfamiliar with the term, “socioeconomic status” or SES is common term in the social sciences. It’s often defined a little differently across various studies, but it commonly includes some mixture of data on income, education, and occupation. This issue of Future of Children looks at a number of factors that have a bigger effect on children from low-SES families. Here are some examples:

They also look at data from the Child Development Supplement to the Panel Study of Income Dynamics (PSID-CDS) and find that the ways in which children spend time are different in lower-SES households: specifically, less time in school and family or other adults, and more time involved with media. They write:

The amount of time children spend in school has risen over the years, particularly among preschool children. Between 1981–82 and 2014, the length of time spent in preschool has almost doubled, jumping from a little over two hours per weekday to four hours. This is consistent with the rise of full-day preschool programs during this period. …  We also see a large shift toward children spending much more weekend time with media, though weekday media exposure hasn’t changed much. Weekend media exposure has jumped by 62 percent among children ages 12 to 17, and by roughly 40 percent among younger children. The data show a corresponding drop in time spent with family, other adults, and peers.

Other papers in the issue, like “Peer and Family Effects in Work and Program Participation,” by Gordon B. Dahl and “Social Capital, Networks, and Economic Well-being,” dig into the effects of growing up in neighborhoods with different social and peer networks.

In their essay, Ariel Kalil and Rebecca Ryan “provide an overview of what scholars know about the differences in parenting behavior by SES that contribute to differences in children’s outcomes by SES.” They survey evidence  that “high-SES parents have consistently engaged in a wide range of enriching activities in and outside the home—such as reading to children and taking them to the library or a museum—far more often than their lower-SES counterparts.” They mention the well-known study of how many words children hear in their early years:

A famous example of this difference comes from a study by Betty Hart and Todd Risley, who intensively observed the language patterns of 42 families with young children. They found that in professional families, children heard an average of 2,153 words per hour; in working-class families, the number was 1,251 words per hour; and in welfare-recipient families, it was only 616 words per hour. By age four, a child in a welfare-recipient family could have heard 32 million fewer words than a classmate in a professional family. More recent studies have clarified that the bulk of the difference in the number of words heard by children in higher- versus lower-SES families comes from words spoken directly to the children, not words said when children are present, and that the language used in higher-SES homes is more diverse and responsive to children’s speech than that in lower-SES homes. This SES-based difference in linguistic environments could plausibly contribute to SES-based gaps in children’s early language skills, especially given the robust evidence linking the quantity and quality of parents’ speech to young children to children’s early language development.

Mothers living in poverty display less sensitivity during interactions with their babies than do their higher-SES counterparts, and in descriptive analyses these differences explain gaps in children’s early language outcomes and behavior problems. … Authoritative parenting describes a broad style of interacting in which parents place high demands on children but also use high levels of warmth and responsiveness. Authoritarian parenting, by contrast, is characterized by strict limits on children and little warmth or dialogue, and punishment tends to be harsh. Studies have found that parents—both mothers and fathers—with more education are more likely to use an authoritative style than less-educated parents, who are likelier to use either an authoritarian style or a permissive style (characterized by “low demands coupled with high levels of warmth and responsiveness”), a pattern we see within racial and ethnic groups and in cross-country comparisons. Supporting these broad differences in style, studies have also shown that lower-income parents use more directives and prohibitions in speech with children than their middle-income counterparts do. Finally, in a large national sample, researchers saw a significant negative correlation between punitive behavior (such as yelling and hitting) and income.

The best evidence on differences in money spent on children across the socioeconomic distribution comes from two studies by Emory University sociologist Sabino Kornrich, using data from the Consumer Expenditure Survey. (This survey, conducted by the Bureau of Labor Statistics, provides data on the expenditures, income, and demographic characteristics of US consumers.) Kornrich and his colleague Frank Furstenberg found not only that parents at the top of the income distribution spend more on children’s enrichment than lower-income parents do, but also that the difference in real dollars has increased substantially since the 1970s. This spending gap has grown despite the fact that parents at all income levels are devoting an increasing share of their income to children, and that the lowest-income parents spend the largest share. …

That said, high-SES parents (especially mothers) tend to work more hours than lower-SES parents and have less discretionary time—but still spend more time with their children. This stems from fact that higher-SES parents (especially mothers) spend more of their childcare time primarily engaged in activities, while lower-SES mothers tend to spend childcare time being accessible to their children but largely engaged in housework or leisure activities. … [I]n a crossnational comparison study, highly educated mothers in many developed countries spent more time than less-educated mothers in primary child investment activities—even in Norway, where universal family policies are designed to equalize resources across parents.

The puzzle posed by Kalil and Ryan is that in survey data, families across different levels of income and education express similar beliefs about what characteristics their children will need to succeed. But on average, families with lower levels of education and income are not spending the same time or having the same success in providing these skills.

Family structure surely plays a role here as well, and Melanie Wasserman contributes an essay on “The Disparate Effects of Family Structure.” The big-picture patterns are probably familiar to many readers, but at least for me, they have not lost their ability to shock. From the 1960s through the 1980s, there is a sharp decline in share of children living with two-parent families, which has leveled out since about 1990. 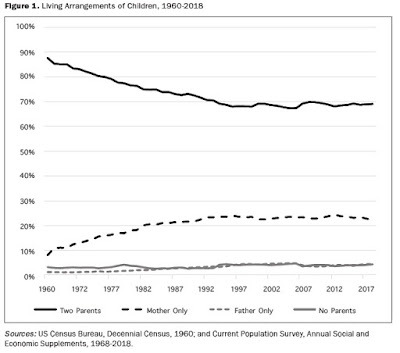 The pattern is less extreme for some groups and more extreme for others. Here’s the data on black children, where the share growing up with two parents dropped sharply in the 1960s and 1970s and has remained at that lower level since then. 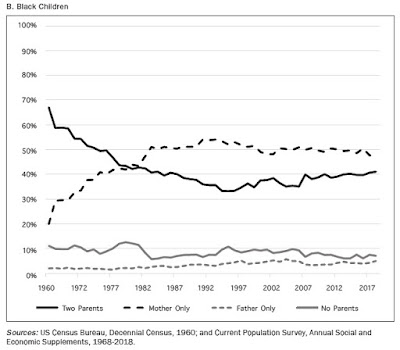 As Wasserman points out, the effects of growing up in a family without a father, and in a neighborhood with few fathers, seems to have a negative effect on boys in particular.

Research indicates that growing up outside a family with two biological, married parents yields especially negative consequences for boys, with effects evident in educational, behavioral, and employment outcomes. On the other hand, the effects of family structure don’t vary systematically for white and minority youth—with the exception of black boys, who appear to fare especially poorly in families and low-income neighborhoods without fathers present. … The evidence on the disparate effects of family structure for certain groups of children may help explain certain aggregate US trends. For instance, although boys and girls are raised in similar family environments, attend similar schools, and live in similar neighborhoods, boys are falling behind in key measures of educational attainment, including high school and college completion. The fact that boys’ outcomes are particularly malleable to the family in which they’re raised provides an explanation for this disparity. … And when we’re considering policy, it’s important to emphasize that the benefits of being raised by continuously married parents don’t stem from marital status alone. Instead, parents’ characteristics, their resources, and children’s characteristics all work together. In particular, when their biological fathers have limited financial, emotional, and educational resources, children’s cognitive and behavioral outcomes are no better when they’re raised by married parents than when they’re raised by non-married parents.59 Perhaps for this reason, policies intended to encourage marriage or marriage stability among fathers with limited resources are unlikely to generate lasting benefits for children.

The issues offers a number of other angles and perspectives as well. For example, I posted a few weeks about about Daniel Hungerman’s essay on investigates “Religious Institutions and Economic Wellbeing,” which explores an institution that also provides support and networking.  There are a couple of articles about articles about discrimination and bias, relating to the effects on parents and families, and also whether young people grow up believing that they have an  opportunity to succeed:

“How Discrimination and Bias Shape Outcomes,” by Kevin Lang and Ariella Kahn-Lang Spitzer, and “The Double-Edged Consequences of Beliefs about Opportunity and Economic Mobility,” by Mesmin Destin.

Many of the article discuss possible policy interventions, and a number of the ideas are being pilot-tested in communities around the country. Here, I’ll just say that a lot of the interventions are focused on families: for example, support groups or home visits for new parents, helping new parents set goals for the kind of parents they want to be and then follow-up on these goals, income support for new parents, job training and placement, and other steps. It seems important to continue experimenting with such programs and paying attention to the results.

But I’ll also add that it may be of equal or greater importance to focus on the communities in which children from low-SES households are growing up. What I have in mind here is support for public libraries, with after-school and evening hours; public parks with opportunities for recreation and hanging out; passes and concrete travel plans to go to museums, historical sites, state parks, cultural events;  pre-school and after-school programs; recreation centers; and just the basic provision of carving out ever-larger safe areas and times in neighborhoods.